I am getting a bit behindhand with the game reports due to various commitments.  This scenario was sparked by a post on TMP and I decided to try and set it up on my 6 x 4 table.  I didn't really have the large ridge required so I had to settle for two smaller ridges, but the table seemed reasonably cluttered with hills and woods.

In the early stages of the 1809 Austrian campaign Berthier had directed Davout's 3rd Corps to Regensburg.  With the Austrian advance into Bavaria, Davout was now in danger of being surrounded.  As he began to withdraw westwards along the southern bank of the Danube three Austrian columns attempted to intercept him.  The action at Teign-Hausen involved the divisions of St Hilaire and Friant from Davout's corps and  elements from Hohenzollern's corps, (also the 3rd).  My scenario starts with St Hilaire's corps at Hausen with the corps baggage train behind it, with Friant's division following the baggage.  On the wooded ridge above Hausen are Vukassovich's advance guard passing through Teugn on the way to support them 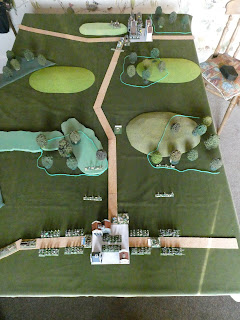 The view from behind Hausen with Friant's division marching along the road westwards.  Their skirmishers have just come under fire from Austrian jaegers in the woods.  The French objective is to get the baggage train along the road and off the western (right hand) edge of the table, and keep the road clear for Friant's division to pass westwards.  For the Austrians, they need to stop the French withdrawal.

As the skirmishing intensified, St Hilaire sent his leading regiment, the 3rd Legere towards the western ridge to support his skirmishers and the 46th Line up the road to Teugn, where an Austrian light battery had appeared.  The 10th Line initially covered the advance of the baggage train. On the western flank, the 2nd battalion of the 3rd Legere attempted to clear the Austrian skirmishers and the French skirmishers moved westwards trying to find a way round the Austrian flank but they were met by a volley from the Grenz battalion placed in support and driven back


A similar exchange was taking place on the eastern ridge, with the Austrian skirmishers and their Grenz supports attempting to halt the French advance. 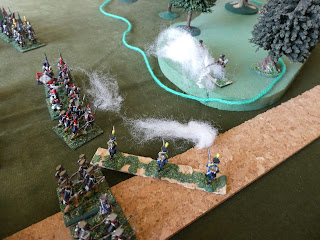 In the centre, the Austrian battery had been joined by a battalion of Austrian infantry, (2nd bn Chasteler,) and two battalions of the 46th moved towards the western ridge to oppose them.  In the western woods the French had managed to gain the initiative and were pushing back the grenz and skirmishers, though at a considerable cost.  The tussle in the eastern woods had reached a stalemate, with a battalion of the 46th trading volleys with 1st bn Chasteler whilst the opposing skirmishers bickered away.

Austrian reinforcements, in the shape of Lusignan's command were now arriving; which was just as well, because St Hilaire had at last managed to get his artillery forward and it was firing to good effect against the Austrian centre.  Lusignan sent 1st and 2nd Deutschmeister onto the western ridge and the two battalions  Reuss-Greitz and Lindenau to the centre.  Back at Teugn, the lead elements of Meyer's brigade were beginning to arrive and Hohenzollern sent them forward post haste.  Deutschmeister arrived on the ridge just in time to meet an attack by battalions from the 46th supported by the 3rd Legere which had worked it's way up through the woods.  The 2nd battalion was driven back with some loss, but a counter attack by the 3rd battalion, which had been held in reserve, managed to regain the heights.


In the east, the fight was entering a new phase.  The baggage train had at last passed through Hausen, releasing the battalions of the 10th Line to support the attack.  St Hilaire sent all these against the Austrian position on the eastern ridge.  An initial push was driven back by volleys from the Grenz, but more and more battalions became embroiled in the fighting in the eastern woods


St Hilaire's weary battalions were lifted by the sight of Friant's division arriving from the east and launched another attack on the western ridge.  Once again the blue coated ranks surged up the slopes but once again the weary white coated line held. 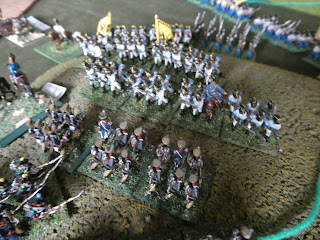 At his position near Teugn, Hohenzollern received the news that the French had been reinforced by a fresh division.  Vukassovich and Lusignan had fought hard, but were now reaching the limits of their strength, with approximately 50% casualties.  Meyer's force was not large enough to push forward against the French and the main prize, the baggage had moved west.  He therefore ordered that his troops should attempt to hold their ground and then fall back under cover of darkness.

For his part Davout was happy to hold onto Hausen and the road.  St Hilaire's division was exhausted and had losses of 50%, Friant's men were sufficient to hold the line and allow their comrades to withdraw and then move westwards.

A difficult scenario for the Austrians to win, perhaps Lusignan and Meyer needed to be nearer to put more pressure on the French.  The wooded and hilly terrain did hamper both sides and considerably aided the defence.

Posted by wargame amateur at 04:50