The French forces were pushing forward into the Low Countries with a view to opening up a line of advance to the Rhine.  An important stage in that strategy was the capture of the fortress town of Yrlm and a siege was under way.  Allied forces were keen to ensure the siege was raised and a force under Graf von Grommit was ordered to cross the river Yrque and establish a bridgehead to enable the main army  to advance and cut the supply route for the French besieging forces. 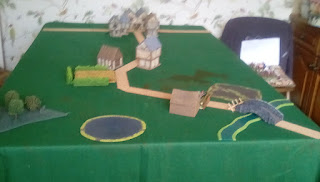 A general view of the table from the bridge over the Yrque; von Grommit needs to advance beyond the buildings by the corn field and threaten the road passing through the village at the far end of the table.  Von Grommit's force consists of two brigades of infantry, 8 line battalions plus a battalion of grenadiers and a light gun and two brigades of cavalry, each of 3 regiments.

Unfortunately for von Grommit, the French have forces in the area.  The bridge is blocked and there is a barricade across the road between the barn and the marsh.

At the bridge, the local commander, the Comte de Salle Forde has two units of dismounted dragoons.  There are further forces at the farm by the cornfield; two units of horse and a regiment of foot.  In the village are a further three regiments of foot and a light gun.  Salle Forde needs to hold his position long enough for reinforcements to arrive.

At dawn the grenadiers advanced across the bridge and started to dismantle the cheveaux de frise.  This proved tricky and in the delay the Hautfort dragoons were able to fire two volleys into the grenadiers.  Fortunately for the grenadiers, the poor light and even poorer shooting of the dragoons resulted in few casualties; though the delay did allow time for the chevalier Clerambault, commanding the dragoons to send off a courier to Salle Forde alerting him to the enemy attack.  Clerambault also ordered the second unit of dragoons, (Royal Dragoons) to cover the gap between the barn and the river.  Eventually the grenadiers cleared away the cheveaux de frise, moved forward and deployed.  After firing a volley they charged the Hautfort dragoons, who gave a rather scattered volley and fell back.  The grenadiers' advance opened the way for the infantry of the Palatinate/Hessian brigade to cross the bridge. One unit, the Palatinate Lifeguard Regiment moved left to attack the Royal Dragoons.  The dragoons were already exchanging volleys with the Erbprinz regiment and offered little resistance when charged, falling back in disorder.

Clerambault's position was disintegrating.  The Hautfort Dragoons, now out in the open, came under fire from the allied artillery and soon began to waver.  Having dismantled the barrier, the grenadiers advanced, fired a volley and then charged the Hautfort Dragoons.  Against the odds the dragoons managed to survive the impact and to the dismay of von Grommit, the grenadiers cracked, routing back towards the bridge. 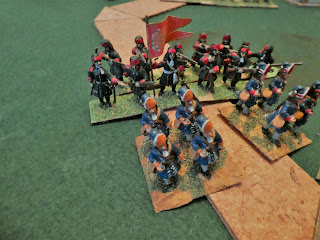 Fortunately, the Hessian infantry were now across the river,  Lowenstein deployed to face the Hautfort Dragoons, with Erbprinz advancing in support.  Wartensleben moved right to cover the advance, because a new threat had appeared in that direction.

Clerambault's courier had delayed to rouse the troops at the farm before galloping off to the village.  The commander of the cavalry brigade at first deployed his cavalry either side of the road and waited for the infantry, (regiment Royal Italien), to form up.  Lacking orders they simply formed column on the road awaiting events.  Once the courier reached the village and passed on Clerambault's message to Salle Forde; the commander ordered Comte Merlot, the brigade commander to assemble his troops and move them to the farm and organise a defence.  He also sent couriers off to request reinforcements.  Merlot sent orders to Royal Italien to move forward and support Clerambault.  Meanwhile, the cavalry had moved to the left of the farm to oppose any advance from the direction of the bridge.  Von Grommit could only deploy Wartensleben to meet this threat whilst the remainder of his force crossed the river.

Von Grommit's leading cavalry brigade had now crossed the river and made its way round the barn and headed for the gap to the right of the cornfield.  The French cavalry had been ordered to charge Wartensleben twice, but on each occasion the troopers had remained in position.  To add insult, the cavalry had come under fire from the allied light gun and losses had begun to rise.

The Palatinate Life Regiment had now eliminated the Royal Dragoons.  Most of the survivors had been taken prisoner, the remained had routed into the distance.  Once the cavalry had passed, they returned to help the Hessians.  The assistance was required because Merlot's infantry was now arriving to bolster the defence.  Solre had deployed into the cornfield to support Royal Italien and Languedoc and Zurlaben had moved to the left of the farm to face Wartensleben.

With the arrival of Merlot's infantry, the cavalry now moved to the right to counter the allied cavalry.  Regiment Aubusson led, with Regiment Toulouse in support.  Aubusson charged the Jung Hanover cuirassier and managed to hold them back, at least temporarily.  More allied infantry were crossing the bridge and von Grommit sensed that he was gaining the upper hand.  Lowenstein drove off the battered Hautfort Dragoons and then charged Solre.  Royal Italien were now holding off Erbprinz and the Palatinate Life Regiment.  Jung Hanover were now supported by cavalry regiment Fugger and overpowered Aubusson who had to fall back to rally.  The cuirassier also needed to rally and seizing their chance, regiment Toulouse charged.  They proved unable to prevail, indeed, they were shattered in the impact and routed.  As they fled they carried away Aubusson and the French right flank had ceased to exist.

Salle Forde had little choice but  to order a retreat.  No reinforcements had arrived and he was already outnumbered 2 : 1.
Posted by wargame amateur at 06:03