The Bear and the Crescent: an eastern scenario for Pike and Shotte

Back in January I published this post about my painting plans for this year, specifically prioritising my Hnichliffe Ottoman collection.  I haven't posted anything further for the very good reason that little progress has been made.  However, at last two units of cavalry are complete.


Not enough to take the field on their own, but Steve kindly added part of his collection and there were sufficient to take on a force of Muscovites.  It was an all cavalry affair, set on the rolling steppes. Eight units of Ottoman cavalry, (4 spahi and 4 light cavalry) versus Eight Muscovite units, (4 feudal cavalry, 1 skirmisher unit and 1 general's bodyguard unit plus 2 units of Cossack allies).  The objective was simple, defeat the enemy and drive them from the field. 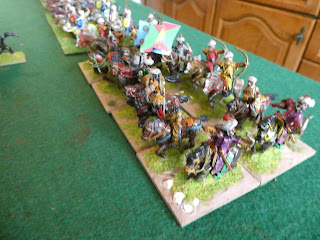 The action opened with a headlong advance by the Cossacks against the Ottoman left wing light cavalry.    In the ensuing melee, one of the Ottoman units was overwhelmed and driven from the field, whilst the other just about managed to avoid routing.  The wing was saved from annihilation by the casualties and disorder in the Cossack units.

In the centre the spahi began their advance.  For their part the Muscovite horse archers managed to avoid being caught in melee, shooting and evading as the spahi closed.  Some casualties were sustained by the spahi, but they continued to move forward.  On the Ottoman right the light cavalry moved forward rather hesitantly even though they were unopposed.

The Mucovites' cause was not helped by a unit of feudal cavalry mishearing an order to advance and instead fell back.  This allowed two units of spahi to attack one Muscovite unit and inflict heavy casualties on it.  The Ottoman commander had by now sent a rather curt order to the right wing light cavalry to advance in support of their heavier comrades, or a risk a swift and permanent demotion.  This had the desired effect, but as the light cavalry moved forward so did the unit they were supposed to support, they still lagged behind.

Half the feudal cavalry were teetering on the edge of collapse, pressed hard by the spahi.  The other two units were standing their ground and even beginning to gain the upper hand.

Eventually the Cossacks recovered from the earlier melee and closed in on the remaining left wing Ottoman light cavalry.  The latter did their best, but outnumbered and still shaky from the previous combat they were swept away, exposing the flank and rear of the spahi units.  Not wishing to spurn his chance, the Cossack commander halted his troops, reordered them and prepared to advance.

With his spahi fully committed, the Ottoman commander sent his aide off to the right wing with orders for that light cavalry to hasten to the left.  He was too late.  The Muscovite commander had spotted that one of spahi units had exposed their rear as they turned to attack the Muscovite centre.  Seizing the opportunity he led his bodyguard forward in a desperate charge.  The commander of the Ottoman right wing light cavalry could have charged the flank of this charge, but his order, if heard, was ignored.  As the spahi tried to turn to meet this threat they became disordered and suffered heavy casualties as the bodyguard charged home.  Reeling from this attack they were then hit in the rear by the horse archers as the bodyguard continued to press from the front .  All order was lost and the spahi streamed from the field.  They were not alone, with his force disintegrating the Ottoman commander gave the order to retreat; which rapidly degenerated into a rout, with the Cossacks gleefully pursuing the fleeing Ottomans.

After lunch Steve and I reset the troops and ran the scenario again.  This time it was the Ottomans who prevailed.  Even though the Cossacks once again were successful against the opposing light cavalry, they were once again disordered.  On this occasion a unit of spahi intervened and drove off the Cossacks, removing the threat to the Ottoman centre.  The Muscovite horse archers once again skirmished against the spahi in the centre, but got too close to their supports and disordered one as they evaded from a spahi charge.  Taking advantage, the spahi charged and drove off the feudal cavalry.  One by one the remaining feudal cavalry units were meleed and then hit by a fresh unit before they could recover.  Theere was little the Muscovite commander could do except gather the remains of his force and pull back further north.

With a win for both forces honours were even.  A most enjoyable day's gaming.
Posted by wargame amateur at 09:38