The inspiration for this week's game came from a post on the League of Augsburg blog. (link).  The game pictured was on a far larger scale than I could contemplate, but it could provide a basis for an experiment pitting our 'Grand Alliance' figures against some Ottomans.  Looking at the maps in Wheatcroft's "The Enemy at the Gate" I settled on Lorraine's advance close to the Danube.  The allied force was predominantly infantry (12 battalions, organised in 3 brigades) with some cavalry and artillery support.  Their task was to clear the Ottomans from an earthwork and then advance eastwards towards the main defences.  Opposing them was 1 unit of levy infantry, a small janissary unit, a small unit of azab skirmishers, one unit of horse archers, one of light cavalry and a unit of sipahi.  The Ottoman commander could call for supports, but what actually arrived depended on a dice roll when the reinforcements were due to enter the table. 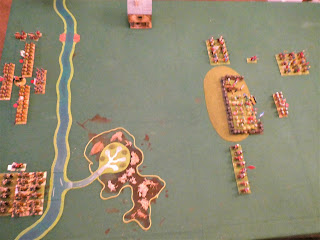 Above is a photo of the terrain for the table.  The river is fordable for infantry and cavalry, artillery need to use the ford; the boggy area is impassable to all troops.  NB the cavalry in the lower left of the photo are not deployed there, they will enter behind the infantry.
For the Ottomans the objective is to delay and allied advance and give time for the decisive attack on the weakening defences of Vienna.  The allies need to make quick progress and draw forces away from the attack on the city.  Steve, as the allied commander, knew what troops he could expect as reinforcements and approximately when they would arrive.   As the Ottoman commander, I could request reinforcements but only had a vague idea of when I could expect them.  Once the appointed time arrived, I would roll a d6 and that score would determine which force, from the list available would deploy on my baseline.
The allied advance was slow and methodical with the infantry crossing the river without becoming disordered.  As they advanced, the light artillery came under fire from the Azabs I had placed in the building and both guns deployed to drive off these irritating musketeers.  Soon the gun in the redoubt found the range of the advancing allied infantry and the combined grenadiers began to suffer heavy casualties.  This eventually routed the small unit and they had to be rallied by the commanding general.  The grenadiers' sacrifice had preserved the regular infantry battalions from the Ottoman guns during their advance.  In an attempt to stop the allied advance, the Ottoman light cavalry moved forward.  On the Ottoman left, the horse archers threatened the infantry's flank and on the right the lancers charged the Danish foot.  A close range volley failed to stop the light cavalry but the casualties it inflicted reduced their resolve.  Driven back in the melee, they commenced a slow retreat, drawing back far enough to attempt to rally.  The Danes had not got off scot free, having suffered significant casualties.
On the Ottoman left, the archers had been shooting at the infantry, but inflicting little damage.  With the allied cavalry taking it's time to get forward, it was up to the second line of infantry to take some action.  A few volleys were sufficient to force the archers back and relieve the pressure.  Back on the right the sipahi charged the Danish infantry.  Charging home through the close range volley they inflicted heavy casualties which routed their opponents.  However, they had taken sufficient casualties themselves to prevent them following up.  To avoid the volleys from a supporting regiment they had to fall back to rally. 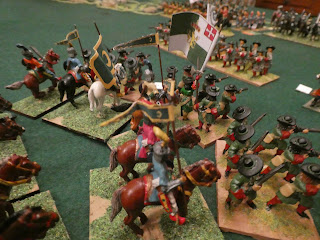 On the far right, the light artillery had eventually managed to drive the azabs from the building, clearing the way for an advance on that flank. 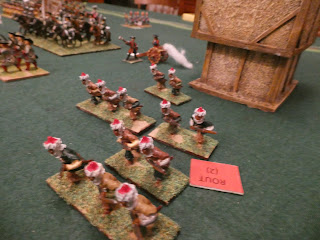 By now, the allied cavalry had moved forward and made their presence felt.  On the right, the Erbach regiment charged the horse archers, who attempted to evade, but were caught before they could move.  It was a rather one-sided affair, with Erbach coming through unscathed while the archers fell back.  Erbach followed up, pushing the Ottomans back again.  Before the archers could recover they were charged again by Erbach and driven from the field.

By this point the Ottoman commander was a worried man.   More allied troops were crossing the river and the remainder of the first wave of attackers was outflanking the redoubt.  His cavalry were still not fully recovered from their earlier fighting and the allied cavalry was pressing forward.  He only had one reserve, a small unit of Janissaries.  Then reports came to him that reinforcements were arriving.  Looking back towards the city he could see cavalry and infantry approaching their familiar banners fluttering in the breeze.  Assuming the cavalry would occupy the rampaging Erbach, he place himself at the head of the Janissaries and led them to the left to attack the allied infantry on that flank.  Charging through the close range volley the Ottomans crashed into the allied line.  In spite of their best efforts they could not prevail and had to fall back.  The enemy gave them no chance to recover, charging their opponents and routing them.

Fortunately the allied infantry had suffered heavy losses and needed time to rally before they could continue to advance.  In the redoubt, the levy ignored this reverse and stood to their front.

The Ottoman cavalry arrived in the nick of time.  A unit of sipahi charged Erbach, confident in their superior numbers.  They received short shrift from their opponents, who quickly drove them from the field.  On the opposite flank, the original unit of sipahi, now rallied charged the allied infantry and stopped them in their tracks.  The position there was still perilous, the Veningen Gendarmes were working round the flank of the sipahi and only a unit of light cavalry was in a position to stop them.

The Ottoman commander ordered the infantry reinforcements to fall back to the next line of defence, as to advance any further would achieve little and may well only serve to increase Ottoman losses.  He then mustered what forces he could and began to try and get them back to the main line of defence.

An enjoyable evenings game.  As you may expect, the allied infantry fire power could handle most Ottoman attacks.  The Ottomans could perhaps have done with more cavalry and they could certainly have done with more space, allowing them to threaten the flanks of the allies more effectively.  [A point made by Bruno Mugnai in his recent book ] .    Whilst compiling this post I happened to have a telephone conversation with my friend Alasdair, a former wargaming opponent now living in Scotland.  He said that he felt that even with his 12 ft table there was not enough space on the flanks to really represent the flanking tactics of the Ottoman army using 25mm figures.  Perhaps I should have gone for 15mm or even 10?

Posted by wargame amateur at 12:17