The second part of last weekend's wargames activities was the AGM of the Gentleman Pensioners on the Sunday.  Steve, our host, had set up the battle of Germantown and I was allocated one of the four  columns making up the American attack.  Historically, foggy conditions had made the co-ordination of the attack difficult and the confusion transferred itself across the years and into the wargames room as two of the trays holding the troops were mixed up and the artillery appeared on a different road to that intended!  A view from the British perspective can be found on Will McNally's AWI blog
Here is a link to a map of the action.  To further represent the difficulties of a night march the column commanders had to roll a dice to see if they had arrived on the field, two did, but two, including my column were delayed. 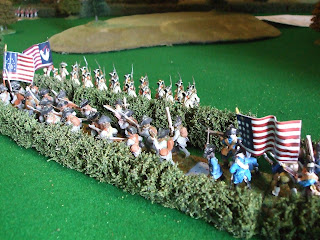 Dave commanding the column on the far right was soon in action, his rifles starting a firefight with a flank guard of Hessian jaegers.  Eventually the Hessians pulled back, but they had delayed the American column and given chance for the rest of Roy's command to form a defence line.  However, the dice had now decided that my troops could now enter the fray and from that moment on my knowledge of what was happening outside the range of my artillery is rather sketchy.

To my right Ian's column was making good progress down the road, but on hearing firing to his right he began to move in that direction, towards Chew House.  This strongpoint was ignored by Roy, who pulled back his light infantry towards Germantown, consolidating his position there.  At the time this was thought to be a mistake, especially as Dave's troops were by now making a determined attack on  Roy's left flank.

Leading my column were the cavalry, who quickly out distanced the infantry, ignored some flanking fire from British light infantry and galloped towards Germantown.  The riflemen, moved off the road to oppose the British troops who after firing another volley fell back towards the town.  This cleared the way for my artillery to take up its position on a low hill and begin firing at the British troops defending Germantown.  Roy had had difficulty getting his command organised (he was plagued by low dice rolls) but eventually a strong defensive position was established.  This was just as well for Chris's main column (with the elusive artillery) had now arrived and so all four American columns were bearing down on the British position. 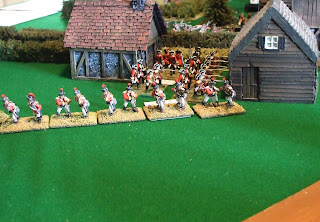 My rifles were now lining a hedge with a clear view of the British defenders and my infantry battalions were deploying from the road to attack  the British right.  The cavalry thought that there was a chance to charge one of the British battalions in the open.  However, as they formed up to charge they were hit by a volley from the British infantry and before they could recover from that a second volley sent them tumbling back in a rout.

To my right Ian was trying to dislodge the British Light Companies from a hedge line and Chris was firing on the troops holding the church.  On the far right Dave was making valiant attempts to capture some of the Germantown buildings. 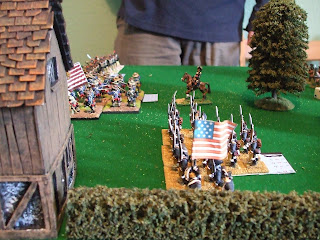 Roy had been casting anxious glances over his shoulder looking for reinforcements arriving and at last his prayers were answered.  Phil and Will arrived with their columns of reinforcements, one on each flank.  Part of Phil's infantry  deployed to face my battalions, but the grenadiers carried on up the road towards Ian's men.  Ahead of the grenadiers were the light dragoons.  They seemed to have a charmed life, passing through infantry and artillery fire without suffering any losses and moving quickly along the road to their front,  they were soon in the rear of the American position.

The grenadiers were not so lucky.  My riflemen did not miss when firing at them.  Several officers were hit and in confusion the grenadiers routed.  Success was brief however,  The American militia battalions could not face up to the British line in the open and, in what seemed like the blink of an eye, all three were routing back down the Limekiln Road.

Ian was also sustaining heavy losses.  His battalions had been unable to push back the Light Companies and two others had failed to stand when charged by the British troops.  He quickly established a second line of defence around the strongpoint of Chew House. 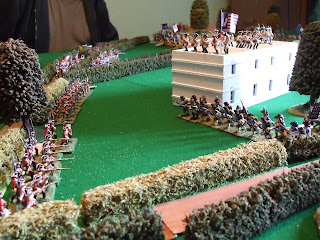 Chris had been holding his own against the Germantown defences, but the gun he had pushed forward to bolster the attack  had been abandoned by its crew when they were fired upon and seeing Ian pulling back, he too fell back.  Dave too had been forced onto the defensive due to heavy losses and the reinforcements from Will's column.

For me, total defeat was only a few moves away.  Phil's cavalry had moved round behind me.  I attempted to hold them off with my cavalry, but that failed, with my troops being swept away.  Phil's men then totally destroyed two of Ian's touting battalions and for 'afters' overran my battery.  On Limekiln Road one of my battalions had managed to rally to cover the rout of the rest and my riflemen were trying to hold back two advancing British battalions.  Inevitably, the rifles routed when charged and the militia pinned to their front by infantry volleys and attacked in flank also routed.  My command figure, wounded in the final British attack was captured by the all-conquering British Light Dragoons.

The troops around Chew House could see that both flanks were now 'in the air' and that they faced being trapped, so they too joined the general retreat and the action ended with a British victory.

Many thanks to Steve for umpiring the game and the 'Pensioners' for their good company.

Posted by wargame amateur at 09:00