Border patrol: an eastern renaissance scenario for Pike and Shotte

Just before Christmas Steve and I managed to fit in a skype game.  I drew up a scenario where a unit of Muscovite border dragoons had been carrying out a patrol, watching the Cossack lands for any signs of impending raids.  Unfortunately, they strayed too close to the Cossack settlement and failing to get away, ended up in an old border fort.  A messenger had managed to get away and he roused the local provincial Muscovite forces to come to the rescue.  The Muscovite force consisted of two units of light cavalry, two of feudal cavalry, two units of urban streltsy and two of servant Cossacks.

The Cossack commander had been told by his scouts that the Muscovites were on the way and drew up his force to cover the fort.  He had two units of Moloisty, a unit of Cossack musketeers and a small composite unit which was to keep an eye on the fort and stop the border dragoons sallying out.  In addition he had four units of light cavalry.  On the right was a unit of cavalry, the centre was held by the infantry, the musketeers between the units of moloisty.  Two cavalry units were on the left with the final unit held in reserve.  The Muscovite commander received reports of the Cossack deployment and decided to place all his cavalry on the right.  His four units of infantry were to advance and pin the Cossack foot whilst his cavalry, having the advantage of the weightier feudal cavalry would disperse the Cossack cavalry and then sweep round and envelop the Cossack line.

The action began with the Muscovite light cavalry moving quickly forward, although the feudal cavalry were a little more cautious.  As he saw the mass of Muscovite cavalry bearing down on his left flank, the Cossack commander quickly galloped over to the right and led the unit of cavalry there across the battlefield to support the left wing.  Action was quickly joined with the Cossacks gaining the upper hand.  One unit of Muscovite light cavalry routed, the other held on, mainly because a unit of feudal cavalry  joined them in the melee.  The successful Cossack cavalry pursued their defeated opponents straight into the second unit of feudal cavalry.  In the resulting melee both sides fought themselves to a standstill and had to fall back to reform and rally.
One of the moloisty units had drifted across to the left, it's commander thinking its presence would support the cavalry and provide some fire support.  However, this did mean the Cossack infantry in the centre and right were now outnumbered two to one; if the Muscovite commander could organise a coordinated advance the Cossack position would be perilous.  This was proving difficult as although the streltsy were advancing steadily, the servant cossacks were far more reluctant

On the Cossack left the former right wing cavalry were now committed to the fray.  Their intervention tilted the melee in the Cossack favour once more and eventually the Miuscovite light cavalry broke, routing to the rear and pulling the feudal cavalry with them.  There was no pursuit, the Cossacks had paid a heavy price for their victory and would take time to recover.
Towards the centre, the Cossack light cavalry resumed the attack against the feudal cavalry they had tussled with earlier.  Although they caught the Muscovites whilst they were still rallying, the Cossacks were unable to push home their advantage and ended up suffering such heavy casualties they routed to the rear. 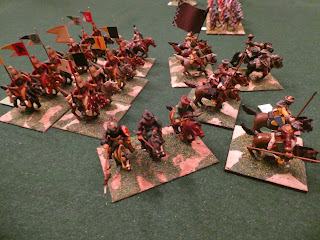 The infantry action had now begun.  As the streltsy came in range the Cossack musketeers fired a volley which inflicted heavy casualties on the advancing Muscovites.  Undaunted, the streltsy charged, only to receive more casualties as they closed and then suffer heavily in the melee.  Even the support of their fellow streltsy unit couldn't hold them in position and they fell back in disorder.  At this point, the reserve cavalry unit which the Cossack commander had brought forward to support the infantry, now charged the hapless streltsy.  Caught at a severe disadvantage, the streltsy were overwhelmed and routed from the field.
Meanwhile the Cossack musketeers, buoyed by their success, decided to charge the second streltsy unit. Although the Cossacks survived the closing volley, the streltsy then employed their berdische axes to good effect, inflicting heavy casualties on their assailants.  It proved too much for the musketeers and they routed, eventually being rallied close to the fort by the Cossack commander.  The moloisty unit on the right had managed to disorder one of the servant Cossack units by musketry, but a volley from the streltsy had caused them to fall back disordered.

Surveying the field the Muscovite commander was not convinced he would manage to reach the dragoons in the fort.  Although his infantry had achieved some success, his cavalry were spent.  He ordered the advance to cease and what remained of his force to fall back to reform.  For his part, the Cossack commander assessed that his force was on the brink of defeat. Although his cavalry had the upper hand, all the units needed time to reform.  His infantry was reduced in effectiveness and may not resist another attack.  He summoned  the dragoons to surrender, offering them safe passage to their lines in return for their firearms and horses.  His offer was accepted by the dragoon commander and after the surrender both sides withdrew under cover of darkness.
An enjoyable action which could have gone either way.  The Cossack cavalry did better than expected against the feudal cavalry, but the musketeers should really have relied on their musketry rather than attack the streltsy.  Both sides struggled to coordinate their infantry due to the number of raw, militia units.
Posted by wargame amateur at 11:50