The Sunday following the Phalanx show at St Helens the Gentleman Pensioners gather for a game at Steve's.  This year Dave provided an ACW "Fire and Fury" game based loosely on the battle of Gaines Mill. 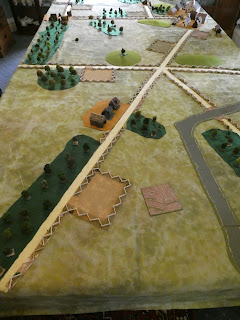 A view from behind the Federal deployment area; the Federal objective is to silence the guns commanding the river.  The guns are sited just left of the town at the top of the photograph.  Commands were allocated by lot and I received McCall's Division.  The Federal generals went away to plan their attack based on the table as we last saw it.  When we returned we found that the Confederate troops had been very busy constructing defensive works, making our task that much harder.  Our plan was for me to enter by the road on the left between the two woods and advance towards the town.  John, with Morell's division was to advance straight up the road from the bottom left and seize the road junction.  Chris, with Sykes' division was to advance down the right, cross the river and then attack the town.  Phil, the commanding general, would use Richardson's cavalry division to support Chris and John; he also held the reserve infantry divisions of Slocum and Roberts, which he would allocate as the battle unfolded. 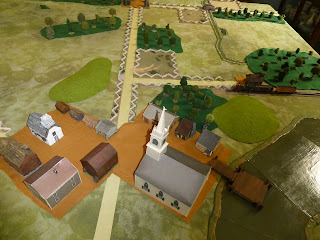 As my troops entered the table they found A P Hill's division waiting for them.  The Confederates had opted for a defence in depth, with a forward line to disrupt our attack and a main defensive line behind entrenchments.  I sent one brigade into the wood on my left and tried to push forward towards the town supported by my artillery.  There was very little space but eventually I was able to make some progress, mainly because Ian, (A P Hill) obligingly began to fall back towards the entrenchments.

John was having real problems as he pushed forward.  The Confederate cavalry had deployed in the town and wood astride his line of advance and were taking full advantage of his brigades in road column.  Fortunately, the Union cavalry attacked the Confederate positions and began to push them back.  Meanwhile, on the Union right Chris was having problems getting his men across the river, the ford being within range of the Confederate artillery.  As this was on the far side of the table I have only a hazy idea of events,  For more detail see Sediment's blog


In the centre of the Confederate forward line was a hill and  A P Hill had deployed his artillery on it.  This was able to fire with some effect on Morell's division as the brigades pushed on towards the cross roads.   After one particularly devastating salvo the guns had to fall back to replenish their ammunition allowing some respite for the Union infantry and leaving this important point vacant. 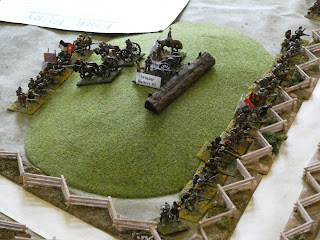 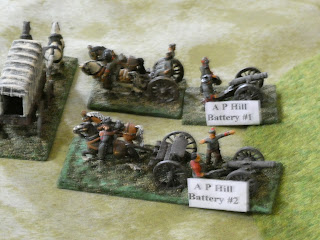 Morell's division continued to push up the road, but a hard fought struggle was taking place between elements of the two cavalry divisions.  Eventually the Union gained the upper hand, taking control of the wood and village, but the Confederates had achieved their aim of delaying the Union attack on the main position.  Indeed, they launched further 'spoiling attacks against Morell's infantry destroying any cohesive advance.


My division was making some progress, slow, but steady.  Each time I thought I had a chance of catching the Confederate brigade falling back through the wood it managed to fall back further.  Phil allocated the two reserve divisions to my flank and with those extra troops I pushed forward more strongly.  The central hill was abandoned by the Confederates and the defenders made for the entrenchments.  One brigade was caught and almost destroyed, as was one battery, but the bulk of A P Hill's command manned the works.

After a full day's gaming there was still a lot of play left in the scenario, but unfortunately, time ran out.  Everyone enjoyed the game, though our previous contact with the rules was minimal.  Dave's scenario was nicely planned, it just needed more time to reach a conclusion.

Thanks to Dave and Steve for umpiring, Will, Andy and Ian for providing tough opposition and Phil, Chris and John my fellow commanders.
Posted by wargame amateur at 08:29