Our game last week was set in Germany early in the decisive 1813 campaign.  To reflect the situation at this time both forces were entirely of 2nd rate troops and some of the units were under strength, particularly the French cavalry. 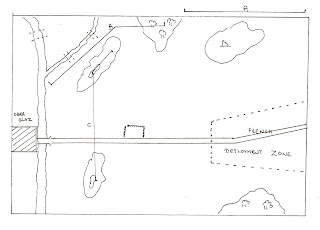 The map above shows the layout of the table.  Marchand, the French commander has a division of 12 battalions, 2 units of skirmishers and a battery of guns.  A provisional light cavalry brigade of 3 under strength units is attached.  His task is to deliver supplies to Marshal Davout in Hamburg and Ober Glaz is the next staging post on that journey.  The wagons need to keep to the road and cross the river by the bridge.  If the fords have to be used there is a risk that wagons could be damaged and the supplies lost.

A Prussian force commanded by General Puttlitz is in the area and consists of 10 infantry battalions, a unit of skirmishers and a gun battery.  Attached is a light cavalry brigade of two full strength cavalry units.  Puttlitz's orders are to prevent the supplies getting through and inflict as many casualties as he can on the French force.

For this game we ignored the purely supervisory role of the C in C and had, in effect two divisional commanders a side.  This allowed a greater dispersion of forces and also the splitting of the division into 2 brigades.  Also, the divisional commanders could help units recover from  'staggered' and 'fall back'.  Another change was to use average dice for the melees, reducing the chances of one side being wiped out in the first round. This, together with our local 'house' rule of rolling for the victor of the melee to roll for a casualty should result in more even combat.

The French deploy first within their zone and then Marchand rolls a d 6.  With a 1 or 6 the Prussians arrive at A; 2 or 3 position B and 4 or 5 position C.  This enabled us to run the scenario through twice and have two very different games.

A roll of the dice allocated the French to Steve and he deployed his troops.  His roll for my arrival was a '1' and so the Prussians came on behind the Schlossberg.

The French cavalry were well forward and I thought it may be possible to swing round behind their infantry and attack the wagons with my cavalry, whilst my infantry attacked the flank.  As with many plans this one did not survive first contact with the enemy.  My right wing was attacked by the French cavalry, the artillery spurning the chance to fire canister into the horsemen before they charged.  The Silesian Militia failed to form square and were destroyed in short order by the 2eme Hussars, who then charged my artillery.  Fortune favoured the gunners. Against the odds they drove off the Hussars, but once again failed to hit the target when firing canister at the Lancers.  The Lancers duly charged the artillery but unbelievably the gunners prevailed again!


My own cavalry attack was progressing reasonably well, though the Frei Korps cavalry had suffered losses from long range French artillery.  French battalions had formed square against possible attack and my battalions moved forward.  However, they were not quite fast enough, for as my cavalry continued their manoeuvre the threat of a charge receded and the French were able to form line and begin to exchange volleys with the Prussians.

By now Steve had decided to leave one brigade of his division as a rearguard and cover the continuing advance of the wagons with the other.  The firefight between the rearguard and my attacking battalions went in the French favour, with most of my units staggered by the French volleys.  My cavalry had eventually reached a position behind the rearguard but found themselves facing the reformed French cavalry.  Ironically their fallback from the failed charges on my artillery had placed them nearer my flanking manoeuvre and in a position to block any attack on the wagons.
Just before they charged my Frei Korps cavalry were shattered by a volley from the 1st Naval Infantry.  The landwehr cavalry continued their charge but were driven from the field by the 1eme Chasseurs a Cheval.

There was now no chance of intercepting the wagons and with over 30% losses in my infantry little chance of inflicting much damage on the rearguard.  A decisive French victory,

After lunch we set up the scenario again and changed sides.  For the second game the Prussians were in position C, blocking the route into Ober Glaz.  Steve had concentrated his cavalry on his left and so I manoeuvred the French cavalry to face them.  I decided to try and outflank him on his right and sent 6 battalions against that flank.  These suffered quite heavy casualties from the Prussian artillery but continued forward.  The remaining battalions were to try and pin the Prussian centre and prevent reinforcements moving to their threatened flank.

On my right the Prussian cavalry played a waiting game, hoping to entice the French forward into musketry range of the supporting infantry.  The French eventually charged and drove back the Landwehr cavalry, but the supporting 2eme Hussars were wiped out by musketry volleys.  Following up the Lancers charged the Frei Korps and pushed them back too.  However, the Lancers had suffered heavy casualties in these melees and as they tried to reform they were swept by volleys fro the Frei Korps infantry and destroyed as a fighting force.  This left only the Chasseurs a Cheval and they fell back to cover the French flank.


In the centre the 4th battalion of the 23rd line had managed to drive back the 9th Reserve Infantry, but the centre was very thin and the wagons were vulnerable to a determined counter attack.  On the Prussian right the hill was lost, the heights having been taken by the 3rd battalion of the 10th line.  Steve was drawing back units to form a line defending the bridge and therefore blocking the road to Ober Glaz.

It was a Prussian victory, the supplies would be delayed and the French infantry losses were in the region of 25%.
Posted by wargame amateur at 07:18