Blunders on the Danube: an eastern renaissance scenario for Pike and Shotte

Another outing for the Ottomans this week; this time attacking rather than defending.  The scenario is set in the Danube valley with the Ottomans advancing westwards and Imperial forces falling back.  One Imperial brigade has been left as a rearguard to give time for a convoy to cross a tributary of the Danube.  The rearguard has drawn up in a narrow gap between two marshes, close to the vital bridge.  Hasty defences have been erected and the Ottomans are marching towards them. 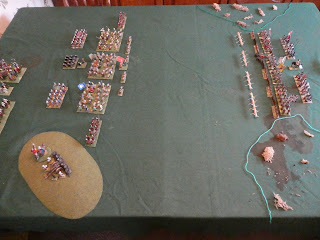 An overview of the table with the Ottomans on the left.  A unit of skirmishers is deployed across the front of three units of levy with small units of tufecki musketeers on each flank.  Behind them are two units of janissaries with a unit of assault infantry in the centre.  In the rear are three units of cavalry, held in readiness until after the infantry have broken through and cleared the way to the bridge.  On the right are the Imperial infantry, three units of Austrian infantry behind the hasty barricade, with two units of Hessian infantry in support.  As a final reserve, a small unit of Austrian cuirassier were held at the back.  Some cheveau de frise had been placed in front of the Imperial position.

With a fanfare the Ottoman infantry began to move forward.  Some units of levy moved faster than others, but the units of tufecki made good progress and were soon in position to on the flanking units of of Austrian infantry.  On the Imperial left, the commander of regiment Herberstein reacted strongly to be shot at by the tufecki.  Exhibiting what was later referred to as "an uncharacteristic lapse of judgement", the colonel of the regiment ordered an advance.  Herberstein climbed over the barricade,becoming disordered in the process, but were prevented from reaching the tufecki by the cheveau de frise.  After suffering another volley, the remnants fired one back and inflicted heavy damage on the tufecki.  With their morale shaken, the tufecki were saved by the advance of the levy, which drew upon them the fire from Herberstein.

The cheveau de frise, which had prevented Herberstein from charging the tufecki, now saved them from the levy, who were halted by the obstruction.  In the following exchange of volleys both sides became shaken and the firing died away as officers tried to restore order.

In the centre, the Ottoman skirmishers had managed to find gaps in the obstacles and were now sniping away at the Austrian infantry, waiting for the rest of the front line to advance and clear the cheveau de frise.  They fulfilled their task of taking the fire from the defenders which would otherwise have been directed at the dense masses of levy.  However, inevitably, they had to fall back to rally due to the level of casualties. By then the main assault was ready and the levy swept down on regiment Metternich which was holding the centre of the defences.  The first push was held, but as more levy piled forward the Austrians began to waver.  Lowenstein advanced from the second line to support them, but it was too late, the Austrian regiment was forced to retreat disordered.

The levy surged over the barricade and pursued them, forcing the Austrians further back, they were only saved from destruction by Lowenstein charging into the Ottomans.

On the right, Furstenburg, supported by the light artillery were trying to hold against another levy unit.  The commander of the rearguard had ordered forward the cuirassiers to support the infantry, but they  found that the position was deteriorating.

On the other side of the hill the Ottoman commander was having problems of his own.  His second line was lagging behind the first and his cavalry simply refused to move.  In exasperation, he galloped from his command position on the hill and over to the cavalry commander.  He explained in clear and concise language what the result of further delay would entail for the health of the said cavalry commander.  Clearly inspired, the commander ordered the advance and the light cavalry moved forward.  However, the sipahi remained rooted to the spot.

In the centre, the Imperial commander was getting nervous.  Lowenstein had charged the levy unit which had broken through, but they were repulsed with heavy loss.  The only thing which saved the Imperials at this point was that the levy had taken heavy casualties and needed to rally before they could advance again.  This gave Lowenstein just enough time to rally and then fire a volley which sent the levy running back in rout. 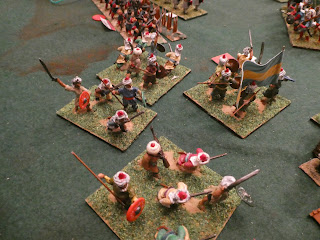 This was only a temporary relief because on the Imperial right, the Metternich regiment, having dispersed the Ottoman skirmishers was now charged by the third unit of levy.  They fired a good volley as the Ottomans charged home but it was not enough to stop them.  Perhaps disheartened by this and events to their left, they began to give ground and this gained pace.  The commander managed to rally them but this left the cuirassier unit trying to hold off the levy.
On the opposite flank the charmed life of the Herberstein regiment came to an end as a unit of janissaries added their fire to that of the levy and the tufecki.  This volume of fire proved too much and Herberstein routed.  Erbprinz were now faced by the janissaries who charged them.  Again a volley was not sufficient to stop the Ottomans and a brutal contest took place over the barricade.  The Hessians were isolated and had taken heavy casualties and failed their break test, routing.

The defences had now been breached along their entire length.  The few Imperial horseman could not stop the Ottomans, the only hope was to retreat.  The Ottoman levy cleared the remains of the barricade away and the Ottoman light cavalry flowed through the gap.
When Steve and I discussed the game afterwards we both thought that the levy units were given too many melee dice on our factor sheet.  Even with bonus for held cover the Imperial infantry struggled to hold their ground.  This will be looked at before we play another game involving the Ottomans.  An interesting twist was that in the previous two or three "Pike and Shotte" games blunders had been noticeable by their absence.  In this we had half a dozen, one of which sent Herberstein out of the defences.  Another curio was the inactivity of the Ottoman cavalry; the sipahi failed to pass a single command test all game and therefore remained rooted to the spot.  This is obviously an extreme result, which caused some hilarity (and perhaps a little frustration), but is unlikely to occur again soon.  However, they say the same about "once in a century floods/droughts/heatwaves" don't they.

Posted by wargame amateur at 19:40