The last time my Napoleonic troops were on the table was nearly 18 months ago, a long gap and mainly attributable to the COVID restrictions.  When Steve and I got around to organising 'skype' games it became clear that with the avaliable cameras 15mm figures were too small to use and we therefore concentrated on our 25mm collections.  However, this week, with restrictions relaxed we were able to meet up indoors again and so I dusted off the figures and set up this scenario.

It is set in the Isar valley during the 1809 Danube campaign.  Rosenburg's Corps is attempting to hold the line of the Isar and cover the flank of the main Austrian army in the Danube valley to the north.  Mouton's corps is marching towards Ober Bruchberg, hoping to seize the bridge and then move north.  Rosenberg has chosen to use the hills on the western bank for his defensive position. 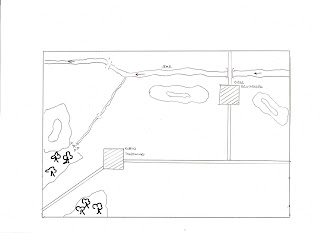 Rosenberg deployed Bartenstein's infantry division on the hill to the south of Ober Bruchberg with one battalion, 1st battalion Deutschmeister, in the town itself.  Mohr's infantry division was on the hill to the north of Ober Bruchberg and Frimont's infantry division was in the area beyond the stream of the Isar.  Nostitz's light cavalry division was placed in reserve on the eastern bank of the Isar, able to move north or south as required.  Rosenberg's plan was for Mohr to hold the hill to the north of Ober Bruchberg, Frimont to advance onto the high ground and then swing south-west to the line of the stream and threaten the flank of any enemy attack from the direction of Klein Sandling..  Nostitz was to move onto Frimont's left flank and pose a similar threat.  If circumstances permitted, Bartenstein was to swing his left flank north-west to threaten the flank of any direct attack on Ober Bruchberg.

Mouton had the infantry divisions of Franquement (Wurttemburg) and Deroy (Bavaria and Baden) deployed on the line of the road south from Klein Sandling.  Franquement, on the right, was to attack and seize Ober Bruchberg.  Deroy was to attack Mohr's position and pin him in place.  Sevdevitz's light cavalry division, which was deployed behind Franquement and Deroy, was to move south to support Franquement's right wing and threaten any infantry advancing from the hill to the south of the town.  On the 'French' left, Fontanelli's Italian division was only just arriving.  It was to pass to the north of Klein Sandling and attack Mohr's flank with one brigade and use the other to hold the line of the stream.

Preceded by artillery fire, the French attack moved forward.  Initially good progress was made, but Mouton's divisional commanders soon began to face problems.  Franquement had to move one brigade to his right as Bartenstein's  leading battalions moved off the hill towards him.  Sevdevitz's light cavalry took their time moving onto his flank and meanwhile a lively battle had erupted between the rival skirmisher screens.

In the centre, Deroi's advance began to break up.  The Bavarian brigade continued towards Mohr, but the Baden brigade halted.  If they advanced further they would be threatened by Nostitz's light cavalry which was massing just beyond the stream.  The plan had called for Deroy's flank to be covered by Fontanelli, but he had run into problems.

The gap between Klein Sandling and the woods  was narrow so Fontanelli continued to advance in column.  However, Frimont had rushed forward his artillery and the columns were in effective range and suffered severe casulaties as they moved forward.  The Austrian skirmishers also made a nuisance of themselves and the Italians deployed into line, slowing their advance.  Encouraged, Frimont now advanced his line battalions onto the hill and then down towards the stream, flanking the Italians.  The leading brigade moved left to meet this threat, slowing the advance of the second brigade which was supposed to be helping the Badeners.

Frimont launched the Stipcisz Hussars against the Baden brigade anticipating that this would force them to form square and provide juicy targets for the Austrian artillery.  In the nick of time a column of Italian infantry moved up on the flank of the Baden Gross Herzog regiment and enabled them to remain in line and deliver a closing volley into the charging hussars.  This emptied a good number of saddles, but not enough to stop the horsemen charging home.  The infantry managed to hold their ground and repel the light cavalry, but this would not be the only charge the Badeners would face.
On the French right Franquement's attack on the hill was not making much progress.  The Austrian Zach infantry regiment had formed square when Sevdevitz's cavalry had moved forward, but the Wurttemburg horse artillery had been unable to disorder the square sufficiently for the cavalry to charge forward and finish the job.  Realising time was slipping away, Franquement ordered the 2nd battalion Prinz Paul regiment to charge the Austrian square supported by the Italian light horse.  The result was a bloody shambles.  The joint attack was driven off with heavy loss, the Italian cavalry lost half their strength and the infantry were so weakened they played no further part in the battle.
Deroy's Bavarians were now in position to assault Mohr's position on the hill.  Their skirmishers had been picking off the artillerymen manning the Austrian guns and although Deroy's artillery had had to re-deploy to face the threat from Nostitz's cavalry the Austrian infantry battalions in the front line had been weakened in the earlier bombardment.  To try and disrupt the attack Nostitz advance the Schwarzenberg Uhlan across the stream.  Here they came under fire from Deroy's artillery, suffering quite heavy casualties and instead of continuing against the Bavarians they swung right and charged the Baden brigade.  Once again it was the Gross Herzog regiment which came under attack and once again they drove off the cavalry.
Along the stream Fontanelli was coming under increasing pressure.  Perhaps sensing that the Italians were on the back foot, Frimont ordered his infantry to attack.  The 4 battalions on the 4th and 5th line regiments suffered particularly badly, two being driven from the field and a third suffering heavy casualties
Glancing to his right, Mouton saw that Franquement was closing in on Ober Bruchberg.  After an artillery bombardment the 1st battalion of the von Neubronn Fusiliers charged the village.  The defenders, 1st battalion Deutschmeister repelled this attack and also one by the 2nd battalion von Neubronn.  As the Wurttemburger infantry formed up to attack again, Sevdevitz took matters into his own hands.  To the south of Ober Bruchberg, between the village and the hill, 3rd battalion Deutschmeister had stood firm under artillery fire and also an attack by the 2nd battalion Kronprinz regiment.  Behind them, the battalion of landwehr from the Salzburg district had also suffered losses from the artillery.  Both battalions looked as if they were wavering.  Sevdevitz ordered the Cheveauleger Prinz Adam to charge.  As the cavalry surged forward Deutschmeister began to form square.  Perhaps due to officer casualties this was not carried out as efficiently as usual and before the ranks were formed the cavalry were among them.  In no time the square was swept away and the survivors sought sanctuary in the village.

Nearer the river, the Landwehr looked on in horror as the regular line infantry scattered and the Wurttemburg cavalry followed up in their direction.  All cohesion seemed to evaporate and they were swept away by the cavalry.
This success was in vain.  Deroy's attack had stalled.  The Bavarians, faced with resolute Austrian infantry to their front and cavalry on their flank, were forced back.  Deroy's other brigade was unable to help and the Italians were fully occupied trying to prevent Frimont breaking through their lines and seizing Klein Sandling.
Mouton had little option but to recall Sevdevitz and Franquement and order them to help Fontanelli hold Klein Sandling and the lines of communication back to the Danube.  Deroy's orders were now to hold the centre as long as he could.  There would be no crossing of the Isar today.
A satisfying game, with both commanders able to take positives from the action.  I was happy that even after such a long break we managed to re-acquaint ourselves with the rules quickly and the game flowed well.  Congratulations to Steve for his stout defence.

Posted by wargame amateur at 15:15