For our latest game we returned to the exploits of the Graf von Grommit and the Comte de Salle Forde.  The town and fortress of Landau has been besieged by the French forces and von Grommit has been given the task of raising the siege.  After waiting several days for reinforcements which did not arrive as promised, he determined to tackle the task anyway.  The delay has allowed the Comte to become aware of the allied project and he has made plans to use part of the besieging force to hold off the allies.  Through a mutual lack of careful reconnaissance, both commanders have been surprised by the proximity of their opponent and this has led to a somewhat hurried move to deploy for battle.  Once on the field of battle, Von Grommit  has discovered that the orders for the artillery have not been sent; an aide was immediately sent with a copy of the orders plus instructions to get the artillery forward as soon as possible.  Salle Forde also had problems, one of his infantry brigades had been delayed and he therefore found himself significantly outnumbered in infantry.

Here is a photo of the table layout, von Grommit's forces at the top.  There are two areas of woodland on the allied right and an impassable river on the left.  The 12" ruler is to give an idea of scale. 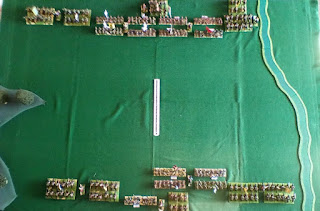 Seeing his advantage in infantry (8 units to 5), von Grommit ordered a rapid advance. Unfortunately only half his force, the right, complied; the Hessian infantry brigade and the left wing cavalry remained rooted to the spot.  Salle Forde was keen to avoid an infantry clash as long as possible, to give his tardy infantry brigade time to arrive, but he did order his left wing cavalry to move forward to try and hold the Allied cavalry away from his outnumbered infantry.  The allied right wing cavalry made a cautious advance, which enabled the infantry to fire a telling volley at the leading French cavalry regiment, Toulouse.  Before the French could recover, they were charged by the Veningen Gendarmes and after a short struggle routed.
The Veningen Gendarmes followed up and crashed into regiment Talmont.  This regiment stood firm and drove back the allied horse, which disordered the cuirassier regiment von Grommit had led forward to support the attack.  With all the French left wing cavalry involved in the cavalry duel, the Austrian infantry felt confident enough to continue to advance, especially as they could only see one unit of infantry to oppose them.
On the opposite flank, the Hessian infantry and cavalry had now began a slow advance.  Salle Forde had moved his infantry brigade forward and supported their right flank with cavalry.  He had also moved the Cuirassier du Roi over for added support, though with events not going well on his left, this was a gamble.  Fortunately, his artillery now arrived and was immediately ordered to move up and support the Bavarian infantry, who were facing the Austrian infantry brigade.
Bavaria had now exchanged volleys with the Palatinate regiment and had also come under fire from the Metternich regiment and pressure on the French left was increasing.  Musketry now extended along the line as the Hessians moved into range.  Most of the fire was at long range so not very effective, but most front line  battalions had by now suffered some casualties.  Salle Forde ordered his right wing cavalry to attack, but once again the allied infantry were able to support their cavalry by firing a volley at the advancing Frenchmen.  This time it was regiment Aubusson who suffered heavy casualties and they were roundly defeated by regiment Fugger.
On the French left Talmont had now been charged by regiment Erbach who were supported by the now reformed cuirassier regiment. The allied cavalry defeated the French and routed them; the French left was now 'in the air'

The Austrian infantry brigade continued to advance and the Bavarian regiment was in trouble, even with artillery support.  Infantry regiment Zurlaben from the second line of infantry now wheeled to offer supporting fire.  As the Palatinate regiment charged forward they received close range volleys from Bavaria, Zurlaben and also from the artillery.  Staggered by this volume of fire, the Paltinate regiment routed.  There was no let up for Bavaria as they were now charged by regiments Herberstein and Metternich.  They held the first push and fought on.
The crew of the French light artillery had seen the allied cavalry victory on their left and taking a gamble, re-deployed to face them.  Regiment Erbach, intent on rolling up the French infantry, charged.  They received artillery fire at close range being stopped in their tracks and then fell back to reform.  As they did so the first units of the second French infantry brigade appeared on the field, ready to advance and support the hard-pressed Bavaria and artillery.  The cuirassiers who should have been supporting Erbach, had not received the order to advance and were still some way away.
The arriving French infantry were not a moment too soon.  Bavaria was buckling under pressure of the Austrian attack.  Eventually, they gave way, but regiment Herberstein also had to fall back and Metternich had taken heavy casualties.  Royal Italien wheeled left to face the allied cavalry and regiment Solre and Montreux moved forward to support the artillery.  These fresh units swung the advantage in the French favour.
On the French right, the cavalry had been fighting hard to hold back the allied cavalry.  Having defeated Aubusson, regiment Fugger now attacked the Cuirassier du Roi.  They proved to be a tougher nut to crack, routing Fugger and then taking on the opposing Jung Hannover Cuirassier.  As the two units battled, the Spanish horse in French service moved to the flank to add their weight to the melee.
At this point, time ran out and von Grommit conceded he would not be able to break through the French.  For his part Salle Forde was aware of how close he had been to defeat.
The source for the scenario was Project WSS by Kronoskaf, who also have the very useful site on the Seven Years War.  I scaled down the forces for the 6 x 4 table and as usual we used our own version of the Pike and Shotte rules, with, on this occasion, the unit stats from the "Last Argument of Kings" supplement to the Black Powder rules.  Here is the map which appears on the Speyerbach page of Project WSS 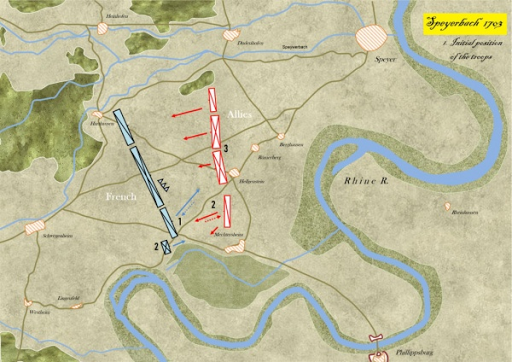 The delays to the allied artillery and French infantry did take place and I made their arrival dependent on dice rolls by the respective commanders.  The French were far more likely to receive their infantry within the first five moves.  Historically, the allied guns only arrived as the allied army retreated.
Posted by wargame amateur at 12:41