For the first time in 6 years Steve and I crossed the Pennines to visit a wargames show in Sheffield.  The last time had been to, what I think was,  the final Triples show.  Our journey this time was to Chillcon.  It was very much a lets give it a try trip.

On the positive side, the show does attempt to attract a broad range of visitors, not just miniature gamers, as the programme states "a convention for all aspects of tabletop gaming".  There was a painting competition, something of a rarity these days and although the emphasis seemed to be on SF and Fantasy, you could not argue with the skill of the painting on display.  In addition, there was a hobby clinic, which looked at airbrushing, shading and terrain.  One area was devoted to boardgaming, with a collection of games for visitors to try.  This was a particularly good idea as you would not want to shell out £30 or more for a game only to find that you don't enjoy playing it.

The games available in the two halls were all participation games, encouraging people to 'give it a go'.  Particularly in the morning there were a good number of attendees, certainly more than enough to fill the car park and plenty of families with children.  This is what is needed to sustain the hobby, which is acknowledged to suffer from an aging demographic. 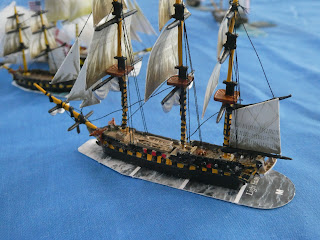 This is photo of a 'Black Seas' game which Steve and I tried.  Set during the AWI a Royal Navy ship is attempting to bring despatches to the fleet and a small sqaudron of Revolutionary ships is trying to stop them.  Historically, the RN ship got through with little damage.  In our game, the historic result was achieved, although the brig which accompanying the RN ship was captured.

If you like the large demo games (as with Partizan, Salute, etc) this will probably not be the show for you.  It's intention is to encourage people to join the hobby, or  try something new, (without having to go to the expense of buying expensive games or figures/models).  Will we go again?  Probably not, but that is due to our particular interests, it is in no way a criticism of she show or the organisers.

Posted by wargame amateur at 11:06