Return to the Steppes

For our latest game, Steve and I returned to the 17thC struggle between Muscovy and the Ottoman empire.  Our scenario came from the 'Task Force' supplement to the 'By Fire and Sword' rules published by Wargamer Games Studio Ltd.  It includes examples of task forces for 10 states, from Denmark to the Crimean Khanate, plus the City of Gdansk. from the 1640's to the mid 1670's.

Here is a photo of the map for the scenario; the objective is to control the hills, each one being worth 2 points. 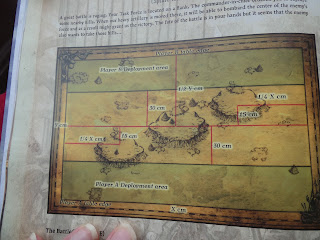 The Ottomans won the initiative and their infantry made good progress towards the central hill, with the two units of Sipahi covering their flanks.  On the flanks, the light cavalry were surprisingly restrained.  To the Ottoman left, one unit of Tartar horse galloped off towards the Cossacks, but the other remained rooted to the spot.  On the opposite flank, the skirmishing horse archers refused to move, but one unit of light cavalry did venture forward.

Learning of the Ottoman approach, the Muscovite commander had been somewhat concerned for his baggage train and ordered his servant Cossack unit to guard it and had brought forward his streltsy to support the Border Dragoons.  This did give him some quality infantry, but it meant that he was now outnumbered in both horse and foot.

On his right, the Cossacks saw the opportunity to attack the isolated Tartar unit and charged.  In the centre, the Boyar cavalry failed to carry out their orders to advance and one of them became disordered in the confusion.  This uncertainty seemed to spread the the infantry, who were also reluctant to move forward.  The left wing cavalry at least claimed the hill nearest them and the skirmishing horse archers moved around it to harass the Ottoman light cavalry which had advanced.

Even with the advantage of a supporting unit the Cossacks came off worst in the first round of melee, only just avoiding being driven back.

In their second move the Ottomans pushed home their advantage in the centre.  The Azab musketeers took control of the central hill and the Sipahi charged the Boyar cavalry.  Both failed to counter-charge and took the impact at the halt. One managed to win the first round of melee, but the disordered unit of Boyars lost and became shaken due to casualties. On the Ottoman right, the light cavalry at last obeyed orders and moved forward and the two sets of skirmishing horse archers ended up in melee.  The Streltsy fired an ineffective volley at the Azabs and the Border Dragoons inflicted some casualties on the Levy which became disordered.  Once again the second Tartar unit failed to advance.

The Muscovite commander decided to attack the Levy and ordered the Border Dragoons to charge.  Although they moved forward, they failed to reach contact and then took casualties from close range fire.  The Streltsy remained where they were, supporting the Boyars to their right.  On the Muscovite left, one light cavalry drove back the nearest Ottoman unit, but became Shaken in the process.  The other moved forward to support the horse archers.  On the right, the Cossacks fighting the Tartars, broke and fled, but before the remaining Cossack unit could take advantage, the second Tartar unit at last followed orders and raced forward to confront them.  In the centre, one Boyar unit had gained the upper hand over its opponents, but the other began to falter.

Seeing their opponents falter, the Levy charged forward and got the better of the initial clash.  The Streltsy were ordered to charge into the melee in support of the Border Dragoons, but as they did so they were hit by a volley from the Azabs and suffered significant casualties.  Their participation was enough to rout the Levy, but both Muscovite units were now Shaken and within charge range of the fresh Azabs on the central hill.  On the right, the Tartars quickly dispatched the remaining Cossack unit, though both Tartar units now needed some time to reorganise.  The disordered and shaken Boyar unit routed, meaning that the infantry now had their flank 'in the air', but the second Boyar unit had routed its opponents and was now free to come to their aid.  On the Muscovite left, the light cavalry battle was swinging in favour of the Ottomans.  The skirmishing horse archers had been driven from the field as was the second unit of light cavalry.  This meant that only one unit of light cavalry remained.

The Streltsy turned to face the Sipahi, but this left their flank open to an attack by the Azabs.  The Border Dragoons could not help as they had pulled back to rally.  The Boyars charged across to attack the Sipahi, but lost the melee and became Shaken.  The Muscovite commander had no choice but to save what units he could and fall back to the wagons.
A thoroughly deserved victory for the Ottomans, who were quick to seize the opportunities as they arose.  Many thanks to Steve for an enjoyable game.

Posted by wargame amateur at 15:46